Revolutionary machine turns used tires, medical waste, plastics and most any other trash into treasure!

It can take 50 to 80 years for a rubber tire to decompose in a landfill. Yet in less than 24 hours, that same tire can be superheated and cleanly converted into purified steel, medical-grade water, and toxic-free carbon black that can sell for $400 to $800 per metric ton. How? 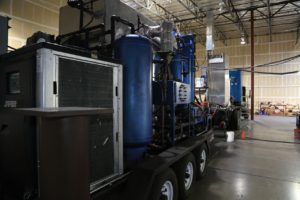 This miracle machine utilizes a proprietary waste-to-energy closed-loop system that produces zero emissions while converting not just tires, but any type of non-nuclear waste -- from plastics and paper to coal waste and food scraps -- into highly desirable products and clean energy. For instance, 100 tons of municipal solid waste can be converted by the Waste Conversion System into 3,500 gallons of diesel fuel, 1 million gallons of pure, distilled, medical-grade water and 84 megawatts of clean electricity -- in a single day. Similarly, the system can turn 100 tons of used tires into 10,000 gallons of diesel fuel, 1 million gallons of medical-grade water, 168 megawatts of clean electricity, and 10 tons of carbon black in a single day, plus 13 tons of crude steel in a year.

The potential environmental impact of this technology is staggering. According to the Rubber Manufacturers Association, more than 450 million tires are either incinerated or sent to landfills each year in the U.S. Old tires that are burned emit noxious gases and toxins. Scrap tires left in landfills or dumped into massive tire piles are breeding grounds for mosquitoes and can leach harmful chemicals into the soil.  Tires aren’t the only environmental offenders, either. Nearly 1 million tons of plastic are produced every day with about half of that winding up in landfills and a large portion of the rest littering our roads and waterways. According to a 2012 EPA-sponsored study, the U.S. spends roughly $500 million each year cleaning up litter along West Coast beaches. Whether decomposing in a landfill, beside a highway or in the ocean, plastics can be toxic to plants and marine life, and leak harmful chemicals into groundwater.

It’s time to stop the madness. 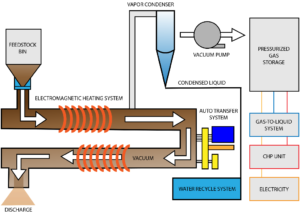 Gold Seal Industries and SynTech Global are working together to solve these pollution problems by creating a series of co-ops between U.S. cities and waste-producing industries. These co-ops would allow cities to become virtually waste-free, while allowing commercial industries to be transformed into green and sustainable profit centers. In addition, both would benefit financially by being able to capture and use the clean energy as well as use or resell the resulting commodities that the Waste Conversion System produces. It’s literally turning trash into treasure.

Contracts have been negotiated with a third-party consortium to buy as much of the output commodities, from diesel fuel and crude steel, to carbon black and bio-char fertilizer, produced by the Waste Conversion System.  Therefore, there’s no need to spend time or money tracking down an end-user for any materials you don’t want. In addition, being able to quickly sell unwanted commodities ensures a swift return on your investment. In some cases, like those using old tires, coal fines or cooking oil as “feed stock” for the Waste Conversion System, the payback period can be as fast as 4 years. Plus, the Waste Conversion System costs a fraction of the price of commercial incinerators.

The simplicity of the system even permits different waste types to be co-mingled, eliminating the need for slow and costly conveyor belts and separators. The Waste Conversion System is covered by a 120 percent performance insurance policy by Lloyds of London. and the component suppliers provide warranties and guarantees for up to 25 years.

So what are you waiting for? Be part of the change. Join SynTech and Gold Seal Industries in making the world a better place by converting negatives into positives.Learn more about how to become part of the solution at www.SynTechGlobal.com or e-mail Dan Bradley at Dan@SynTechobal.com.

Don’t miss out on the free webinar series that is open to the public. Book your calendar today. If your organization would like to share your accomplishments in sustainability management contact us today.

SMA member VSG Visual Solutions just created our sustainable marketing materials. If you are looking for really green solutions, we just wanted to share how…

Please confirm you want to block this member.

You will no longer be able to:

Please note: This action will also remove this member from your connections and send a report to the site admin. Please allow a few minutes for this process to complete.

You have already reported this
Clear Clear All